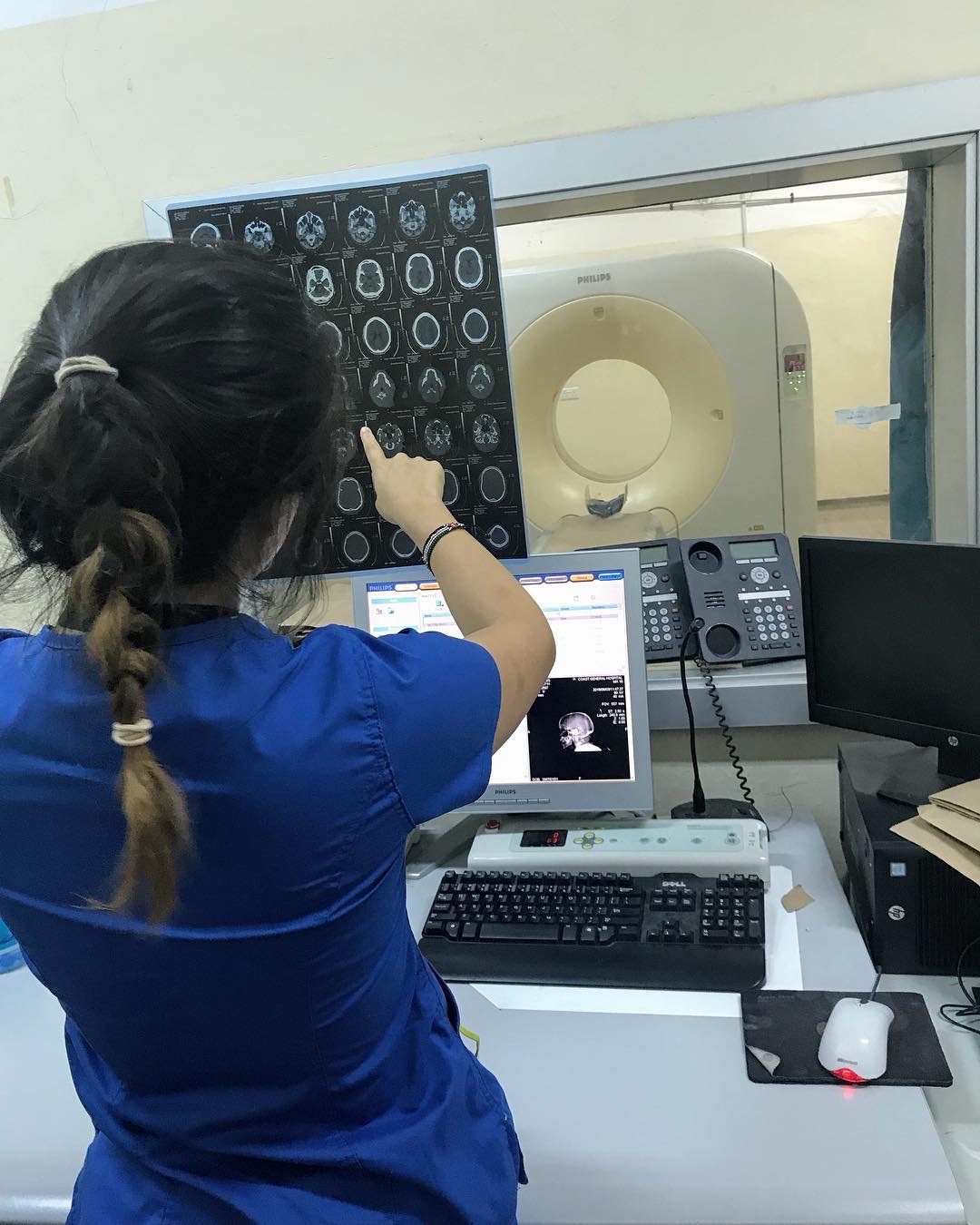 This experience was honestly better than I had hoped or imagined that it could be. The Program mentors and IMA staff were absolutely incredible, super accommodating, and worked super hard to make sure that I got the absolute most out of my experience. I came into this program not entirely sure about my desire to go into medicine and I have most definitely come out of this program more inspired and motivated to pursue a job in medicine.

I came to Kenya on June 13th, 2018, hauling the hazy childhood dream of becoming a field doctor. The doubts and insecurities that arose from my freshman year of college had bombarded that once luminous vision. Thus, my International Medical Aid internship would ultimately serve to either crumble or invigorate those lingering ambitions. The priceless knowledge I have gained from medical staff, peers, and Kenyan natives has spurred my desire to grasp onto my dream of becoming a field doctor with new clarity. Although, I observed many fascinating clinical cases, I found that the most powerful lessons came through the questions I asked from my observations.

At Coast General Hospital, I had the incredible opportunity to learn from the medical staff and observe cases I would not be able to see in US hospitals. Some of the most notable clinical cases I observed included Cholera, Malaria, Hydrocephalus, Organophosphate Poisoning, and Gastroschisis. I learned how to take and read vitals and how to set the oxygen levels for oxygen masks and nasal cannulas. However, the most impactful lesson came from the woman with Herpes Zoster in Surgical Ward 7. She left a burn untreated which was sadly a common occurrence. Eventually, the burn became septic, she contracted shingles, and the entirety of her midsection became one festering wound. As I watched the nurse carefully peel away the dead skin from her oozing breast tissue, I could not comprehend the amount of physical and emotional pain she must have been experiencing. There were no psychologists around to talk her through the body dysmorphia she must have been feeling. And yet, she barely showed any signs of physical or emotional pain except for a wince or two. It was baffling to me. I later learned the cultural norm in Kenya is not to visibly show pain in response to physical pain but it’s customary to openly display emotional pain in response to death, which is the opposite of the cultural norms of the United States. That newfound information caused me to speculate whether pain catastrophizing, which is the tendency to describe a pain experience in more exaggerated terms than the average person, is caused more by genetic or cultural factors. When I get back to school, I hope to do more research in this area and propose a cross cultural psychological study about the factors that contribute to pain.

Additionally, something of interest I noted was the lack of cancer patients during my rotations in different departments. It could have been that most of them were relocated to the cancer center or that cancer patients either could not afford a consultation or that cancer is not as common in Kenya as in the US. After inquiring, I was told that breast, prostate, and cervical cancer are the leading cancers in Kenya. I found it significant that skin cancers were not mentioned since it is quite prevalent in the US. I later asked an ER doctor if sunscreen was a common practice. He informed me that it is not due to the high amount of Melanin in African skin compared to Caucasian skin. However, I felt that since Kenya has a thinner ozone layer because it is located near the equator, that might counteract the effects of having more Melanin. Perhaps skin cancers are not reported as much because it is often diagnosed in later stages whether that is because it is harder to discern the symptoms with darker skin or perhaps because there is a false belief in the commonality of it so it is not common practice to check for skin cancer. I will definitely continue to research and mull over that variation. Despite the engrossing information I took in during my internship, the most invaluable thing I have taken with me are the questions that I hope to be able to independently research in the future.

There were many differences in clinical practices that I observed at the Hospital. For the first two weeks, I was troubled by how nonchalant the staff reacted to medical emergencies; in fact, they did not seem to regard any situation as an emergency. Nevertheless, as I took on my second night shift, I started to empathize with the attitudes of the hospital staff. By 3 am, I found myself mentally conflicted. How could I strive to become a sympathetic field doctor if I accept the suffering around me as normal? The pained moans and terrified eyes that greeted me in every Ward had morphed into an accepted backdrop by my third week. Does one even bother trying their best for patients who look like they are about to die? Once you see enough cases, you will probably be able to predict the life expectancy of most patients that come in. Should you only be prioritizing the people that have the best chance? Is it naive to think I can give every patient 110% of my effort and somehow not grow too emotionally attached? Many times during my internship, I heard about patients who took off their oxygen masks and later died because the nurses did not manage to put the masks back on. I was told that that happens because they know that the patients who seek help at Coast General are not wealthy by any means. Thus, there is no fear of repercussions. I found that frightening. Even if the patient has given up, should their physicians as well? Shouldn’t compassion for others be the driving motivation for doctors rather than money? The next morning, I found myself more motivated than ever to pursue medicine and become a doctor who would care for every patient equally, no matter their background or economic status.

Many of the ethical issues I observed at Coast General can be contributed to a lack of resources. As I was taken on a tour of the Accident & Emergency Department, I was not prepared to be greeted by a cadmium yellow door with vertical bars across the window. It was labelled the “Strong Room” and its appearance was contradictory. To the rest of the world, it appeared to be a cheerful yellow door but the dark, musty interior divulged its purpose as a solitary holding cell with minimal light and no food or water. I was perplexed by the existence of such a room. After continuous inquiries, I learned that patients who are violent or suicidal are locked in the room for days until a nearby psychiatric facility is able to take them. However, during Bella’s presentation, I learned that there were only 14 hospitals in the area equipped to deal with only about 10-20 psychiatric patients. These lack of resources necessitated the creation of this inhumane room of sensory deprivation. The hospital had no physical department to transfer any psychiatric patient to and no straps to tie down any patient that was suicidal or violent. Additionally, the lack of resources at the hospital clearly made it hard to keep sanitary conditions for the safety of both the patients and the staff. Many times, there was no running water for doctors and nurses to wash their hands. The transportation of patients from the OR to a Surgery Ward often involved having the patient physically move themselves from one stretcher to another. There were flies buzzing everywhere because of the building’s open air design. The hot and humid climate mixed with the inability to create a pristine and clean sanitary environment is a breeding ground for infection. Ultimately, I found it incredibly courageous that the staff at Coast General were able to run a functioning healthcare facility with the limited resources they had.

In the US, I acknowledge the existence of the less fortunate but I never truly reflect on the depth of their suffering. But at Coast General, when timeworn beds are lined up centimeters apart, there is nowhere to avert my eyes. I spent weeks at the hospital marveling at the strength of every patient and healthcare professional I came across and heartbroken over the implication that some could not pay the mere $3 USD for a day’s stay at the hospital. This remarkable experience has cleared the hazy doubts in my mind and replaced it with thought provoking questions. I’ve walked away with a newly found motivation to pursue my childhood dream in hopes that one day I’ll be able to shine hope into hopelessness and help patients conquer their illnesses as courageously as the woman in Surgical Ward 7.